Felix Drinkall, who recently completed a Master's of Engineering at LMH, won gold in the men's eight at the U23 World Rowing Championships this summer. The final took place on the 11th July 2021.

Felix recently provided us with an account of his experience, in both the build up and the race, which you can find below. 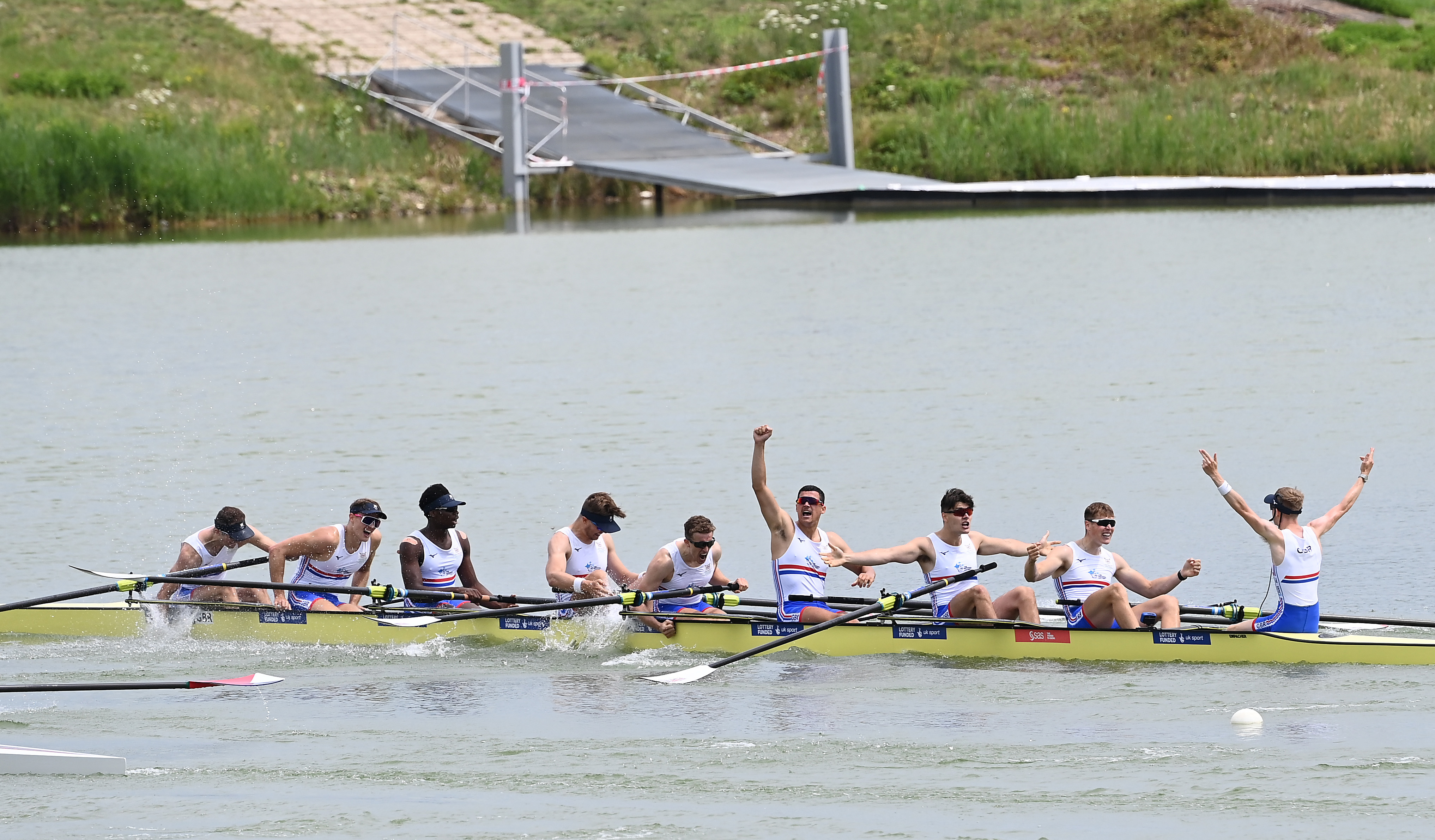 On July 3rd 2021 the 24 month-long wait since my last race for GB ended, I, alongside my 8 other crewmates had arrived in Racice, for the U23 World Rowing Championships. At first, I found it strange to think of the other countries as competitors rather than statistics, as had been instilled in me after a year of BBC headlines. Covid-19 was on everyone’s minds, just before flying out half of the team had been pulled due to a close contact testing positive. Indeed, Czechia had only allowed us entry on the condition that we wear an FFP2 mask whenever we were outside of our rooms, with the only exceptions being in the boat and mealtimes. The odd result being a tightly bound crew; complete isolation from the rest of the team and the removal of external distractions meant that our preparation was completely internal.

The first row at the course was awful. Just prior to flying out we had refined an effective and comfortable way of rowing and were excited for the competition. However, the distraction of a new course, different surroundings and the tension that arose every time we saw the Germans, Italians, or the Americans resulted in rowing that none of us were proud of. The knowledge that no matter what, in 4 days’ time we would be racing to be World Champions meant that there was too much tension in the boat. With ideas bouncing back and forwards as to what was going on, our coach calmly told us that he thought it looked great and that we were all being a bunch of pre-Madonnas. His only instruction was for us to have fun during the next session and enjoy the experience. This one piece of advice characterised the rest of our races.

Each session we rowed with more and more composure. Every single person in the crew contributed vocally to a sense of a confidence I have never felt in a crew. Sitting on the start line of the final I have never felt so calm and ready for a race. Internally, I was just so excited for the race to start so that we could show the world what we had prepared for them. I was completely convinced that if we had our best race we would win (in hindsight I might have been a little overconfident). We were internally ready for a crew to take the race on hard and try and lead early but we weren’t completely ready for three crews to do so.

The Italians, Germans and Americans went out hard and 500m in we found ourselves in fourth place. Our cox was fairly creative with the truth and told us that they were only one or two meters ahead, in fact they were almost 10m ahead at one point. The one thought in my head was how reckless they were being starting so fast. Our rhythm felt good, and I hoped that if we kept up this pace, we would start to reel them back in. Unfortunately this didn’t happen in the second 500m… nor in the third 500m… entering the final quarter of the race we were tied in third with Italy. The Germans and Americans were out in front fighting for the lead. I was still hopeful, the rhythm felt dynamic and powerful. I remember with absolute clarity the feeling when our cox called the first build towards the line, I could feel the belief in the boat. The hull started to fly. There were shouts all the way down the boat as we felt the momentum of the race switch. It was at this point when I took my only glance out of the boat to gauge how much ground we had to make up. I was level with the American cox and level with the person sitting in my seat in the German crew. I knew that it would take every bit of energy I had left to get our bow in front of the Americans. My body was already screaming at me to put the handle down and stop. On top of this, we quickly stopped moving on the Americans. As we entered the final 300m, our cox demanded our max power, a call that he was only meant to make in the final 150m, it was getting desperate, but we had to try it. The boat lifted again, and we began to move through the Americans. I was counting in strokes of three to stop myself thinking about how many strokes I really had left. In the end, we only gained the lead with seven strokes to go and crossed the line as World Champions.

It was completely euphoric yet eerily silent. With no crowds there were just a couple of shouts from the GB coaches on the bank. Everybody in the crew did their best to let out a short grunt of approval in celebration before collapsing over their handles. I was both completely overwhelmed with joy and relief that the pain was over, and I could just lay down. We all immediately knew we had been a part of something very special. It turned out that no U23 eight in living memory had ever won after having been led for 1950m. We had led when it mattered.

More details about the U23 World Rowing Championships