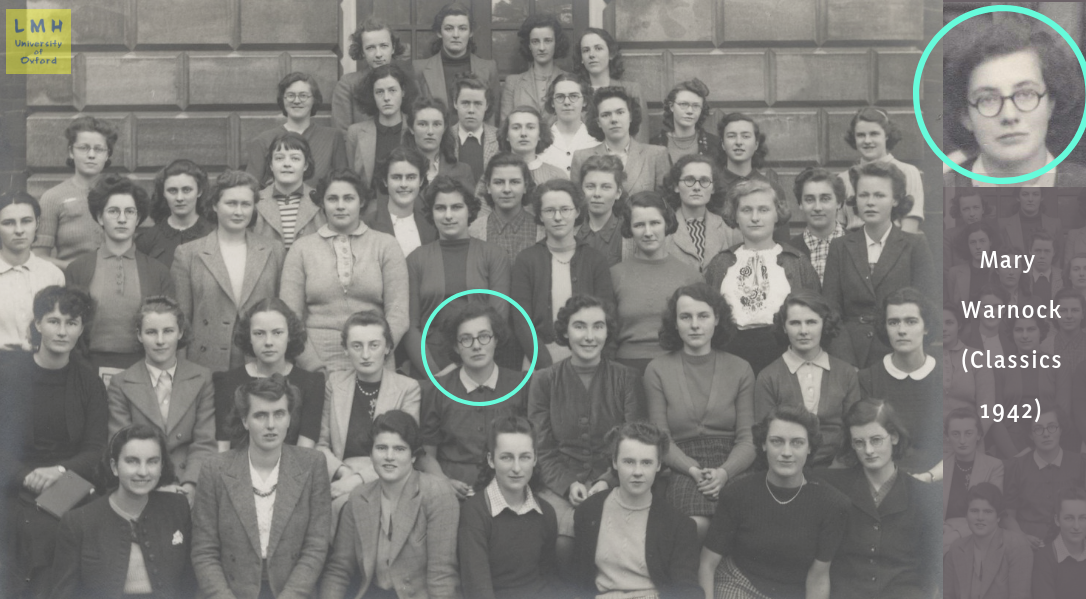 LMH is saddened to learn of the death of former student, the philosopher Baroness Mary Warnock (Classics 1942) at the age of 94.

Baroness Warnock is perhaps best known for chairing two national committees of inquiry for Great Britain each of which published a significant report. The first (1974-78) reported on the education of handicapped children and young persons and resulted in Special Educational Needs (1978). UCL Institute of Education associate professor Rob Webster said: “There has not been a more broad-ranging report into special educational needs and disability since the Warnock inquiry… It remains the most comprehensive review of SEND to be commissioned by a UK government.”

The second influential inquiry dealt with the ethics of embryos and human fertilisation entitled A Question of Life: The Warnock Report on Human Fertilisation and Embryology (1984 reprinted 1985) which was published six years after the birth of the first test-tube baby. She returned to writing about issues related to the ethics of human reproduction in Making Babies: Is There a Right to Have Children? (2002).

Baroness Warnock was born in 1924. She won a scholarship to Lady Margaret Hall Oxford and began her studies here in 1942. One of her closest friends during this time was Charles de Gaulle’s daughter Elisabeth. She remembered wartime Oxford as horribly cold and hungry: she loved the work, the learning and the refugees who taught her, but everything else was a constant, disheartening struggle.

She left after five terms to teach, as a way of avoiding Army service, which would otherwise, she feared, keep her in Bletchley, code-breaking, until the end of the war with Japan, which was expected to continue for years. At Sherborne School for Girls, she discovered a passion for teaching.

Baroness Warnock taught philosophy at St. Hugh’s College Oxford from 1949 to 1966. Thanks to two books on existentialism in the 1960s she became a regular philosophy commentator on BBC Radio 3. She served as headmistress of the Oxford High School from 1966 to 1972. She was a member of the Independent Broadcasting Authority from 1973 to 1983 and was considered as a possible chair of governors of the BBC in 1980; she chaired a commission of inquiry into laboratory animal experiments and sat on a Royal Commission on Environmental Pollution. Warnock was mistress of Girton College Cambridge from 1984 to 1991 and became a Life Peer in 1985.

We will be marking the extraordinary life and work of Baroness Warnock in a longer article to be published on the LMH website.