None of us imagined any of this.  I did not imagine, when I thought of a life in Oxford, that I would end up spending two months in a rickety tent.

I like the start of Michaelmas Term - mainly because it means meeting lots of news faces as they begin an entirely new chapter in their lives.  I try to see every single new undergraduate, graduate, visiting student and postgraduate, if only for a few minutes each. That’s just about  time enough to get a glimpse of the new student - who they are; where they come from; what they’re excited about; what they’re worried about. What do they do for fun? Why did they choose LMH (if they did)?

The American students are often the best in a situation like this: they have ready-cooked versions of their lives all ready for the telling. A very British response is to shrug and mumble: “Well, there's not much to say really.” Of course, there always is.

But as the start of Michaelmas Term 2020 approached the pandemic news grew grimmer. I was faced with two options. I could see 240+ students across a distant office with windows open and hope for the best. Or we could all retreat to the safe not-quite-reality of Zoom.

And then I had the idea of a tent. On the top shelf of my garden shed were two gazebos bought some years ago as weather insurance for a party, and never used. Once I’d struggled to put them up  in the back garden of Number 6 Fyfield road one of them turned out to be enormous - it could seat eight safely spaced, no problem. And the other would work nicely as a waiting room. I was all set.

Now for the clothing. My son in law pointed me to Uniqlo fur-lined tracksuit bottoms. I researched thermal leggings and settled on something called Under Armour. I had a padded jacket bought last year in Finland which promised to protect its wearer to minus 15 degrees. A beanie and stout walking boots, and I was ready.

Or almost ready.   I invested in a fire pit which I lit an hour early each morning. And Dave, the College electrician, rigged me up with some electricity for lighting once the winter nights drew in.

And then I opened the doors. Or, rather, the broken down back gate to the Lodgings.  Brodie, the newly-arrived Lancashire heeler, soon settled into a routine of wildly greeting each new student before flopping into a bed next to the fire pit.  The interviewees quickly got the hang of the waiting room routine. And thus it was I spent the best part of six weeks sitting in a tent meeting the most recent generation of LMH-ers.

Most were very happy to be in Oxford, despite everything. Some were lonely, most were settling in fine. Why LMH? The answers were usually: a) the history; b) the gardens; c) the atmosphere when they came on an open day; d) the website made it look cool; e) they particularly wanted to study with Professor X.

Worries? a) The workload; b) “I wouldn’t fit in/make friends.” But this year - maybe counter-intuitively - b) turned out to be much less of an issue. Everyone had been pre-assigned a social household or bubble - and nearly everyone said this made Freshers Week much less of an ordeal than having to try and make friends in bars or nightclubs. Only one student said they didn’t much like the household they’d been allocated.

The weather started cold, but dry. Then the rain started - and the weatherproof qualities of the gazebo and the firepit were sorely tested. The structure was still - just - standing after snow. And I very nearly lost it in the middle of an interview with a graduate student, which coincided with a sudden tornado arriving over OX2.

Happily the student was ex army and very nearly seven feet tall. He leapt to his feet, mid-interview, and anchored the gazebo as it tugged at its moorings, threatening to float away in the general direction of Keble. The day was saved.

In the evenings we sent out for curry-take aways and small groups of fellows huddled for small socially-distanced time-limited suppers by candlelight. I managed several classes with the Foundation Year, with a handy flip-board for company. The gazebo even achieved modest fame being featured on the local early evening BBC news bulletin.

By Hilary Term even gazebo meetings were deemed illegal by the government. But by then my tents had served their purpose of allowing me to meet nearly every new LMH student on arrival.

Life at LMH continued, with students still in residence using the gardens to walk, run, practise yoga and even row on portable rowing machines on the hockey field. As I write fingers are crossed - knotted, even -  that life will tiptoe back to something like “normal” by Week 5 of Trinity Term. Here’s hoping. 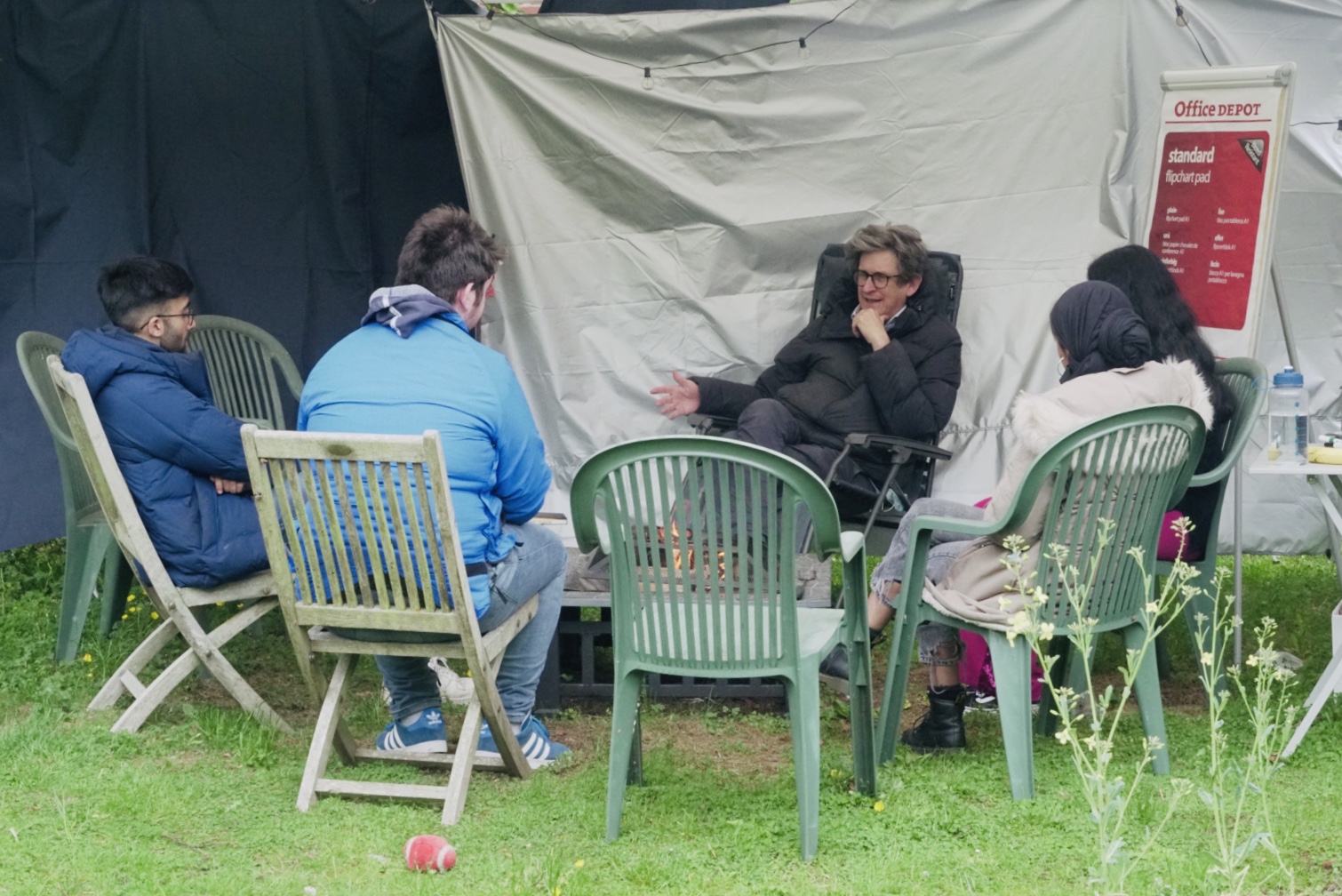