I was thinking about what it must have been like to be at LMH during the last great global pandemic – which lasted for much of 1918 and 1919.

Two sources of material provide fascinating glimpses – the Brown Book, which goes to all alumni; and the Fritillary, a magazine with brief reports on life at the then women-only colleges of Oxford.

In November 1918 – nine days after the Armistice making the end of WW1 - the then Principal, Henrietta Jex-Blake, wrote a short report of life at LMH. It recorded that, for the first time in LMH’s history (it was then about 40 years old) an undergraduate had died. Her name was Joan Luard, and she had only been in residence for a brief period. She is buried in Birch, Essex. She is recorded by Jex-Blake as having died on October 26th 1918, (though the Fritillary dates it as April 26th 1918). 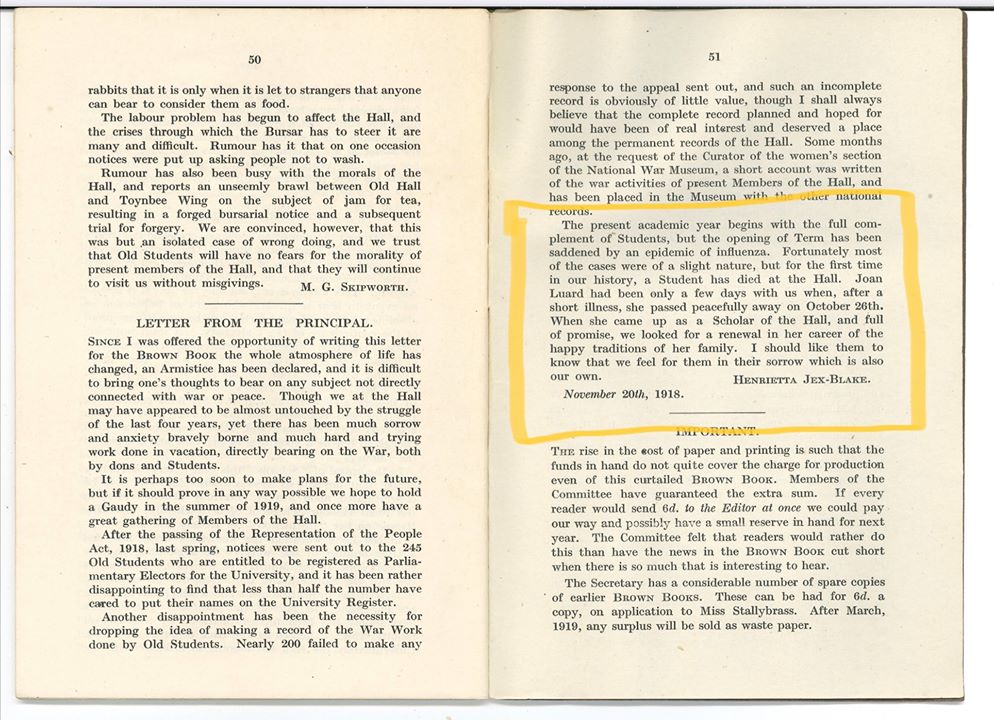 A year later the Brown book carries an Oxford Letter which speaks of the Armistice having coincided with “the end of our visitation by the influenza epidemic.” 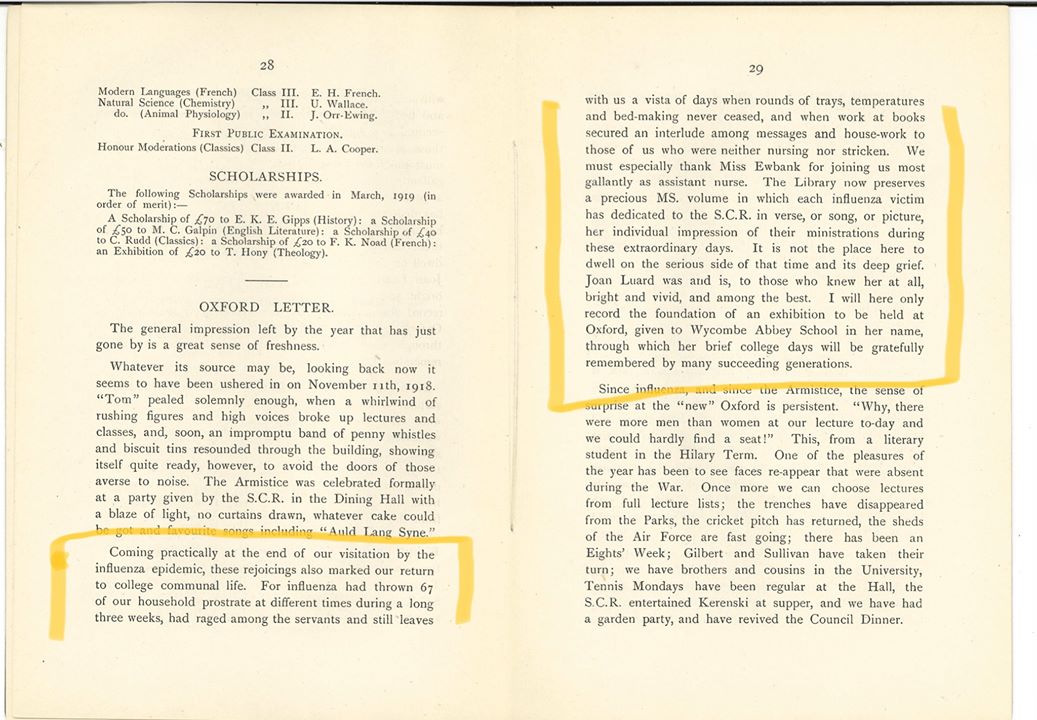 It records that “Influenza had thrown 67 of our houseful prostrate at different times during a long three weeks, had raged among the servants and still leaves us with a vista of days when rounds of trays, temperatures and bed-making never ceased and when work at books secured an interlude among the messages and house-work to those of us who were neither nursing nor stricken.”

Interestingly (can you help, James Fishwick-Ford or Olly?) all those who came through created a special volume (and gave it to the Library) “in verse, song or picture” recording their individual impressions of their “ministrations during these extraordinary days.”

Again, the writer remembers Joan Luard – “bright and vivid and among the best”

The 1918 book talks about the war effort – including flax-pulling and clerical working. And notes that the nation’s food supply has been further increased by a colony of rabbits, which is housed at the back of Pritchett’s shed.

These were Beyonce’s predecessors.

But the note adds: “ Unfortunately the Hall has become so intimate with the rabbits that it is only when it is let to strangers that anyone can bear to consider them as food”

Anyone wondering about whether the disruption due to Covid-19 is unprecedented will note from the Fritillary that “owing to influenza there has been only one normal week or term.” There were no sporting activities. The Essay Club (!) managed only one meeting. 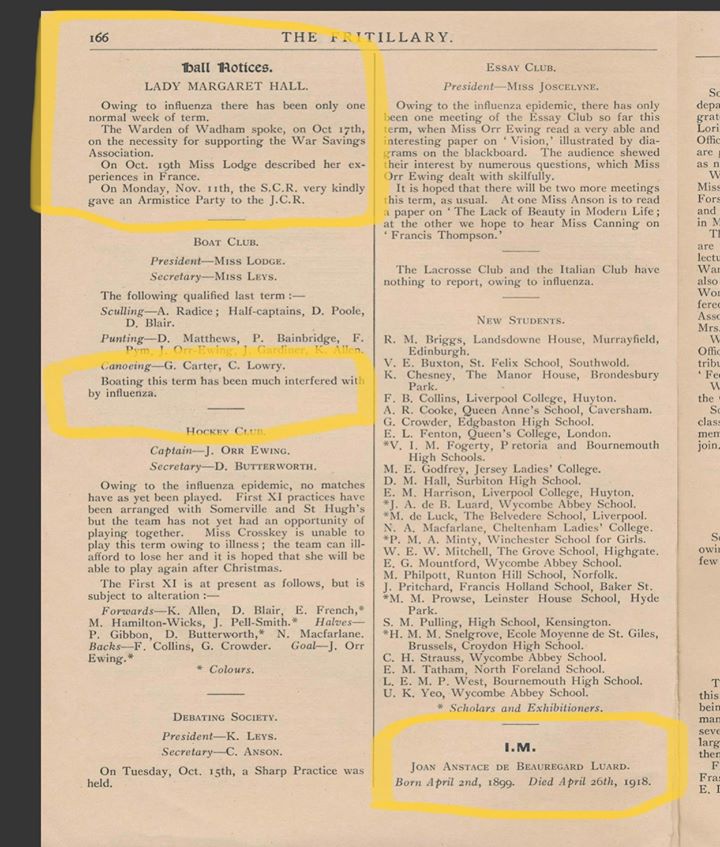 A year later the magazine recorded it was “very pleasant to see the College resuming its normal aspect.”

“Last, and not least, the rabbits have ceased to be looked on as a potential emergency ration and are now the pets of the College.” 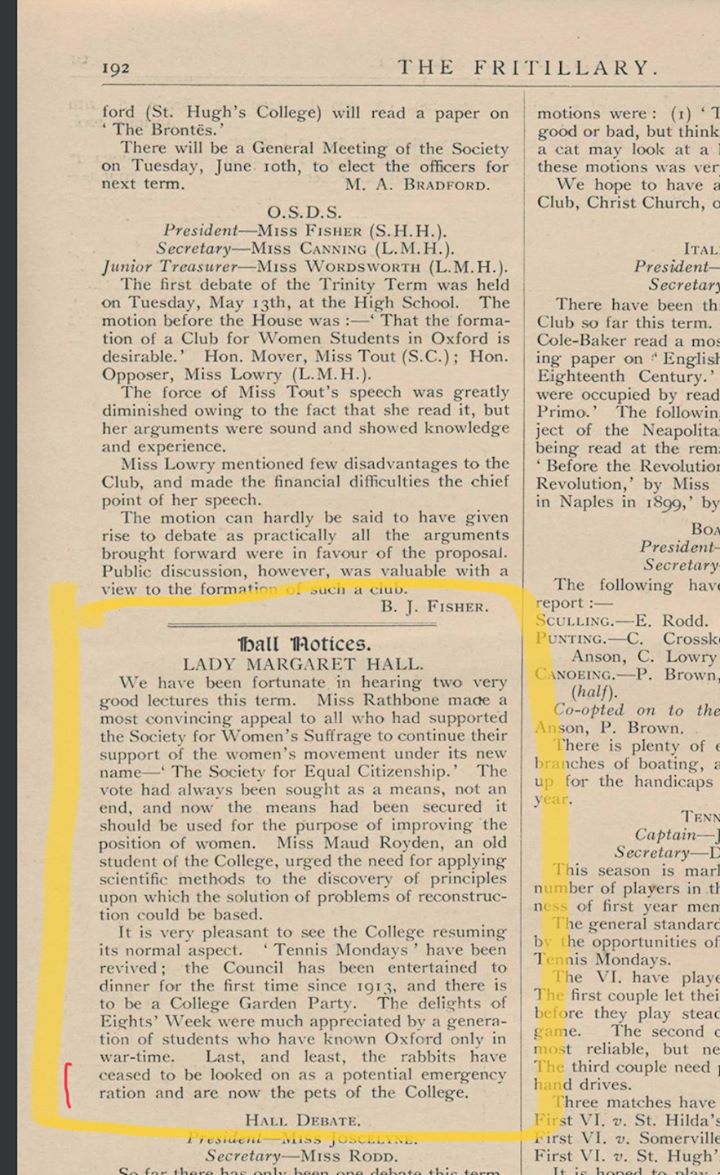 A vivid glimpse of life at Oxford during this period is contained in Vera’s Brittain’s The Women at Oxford, a fragment of history (1960) 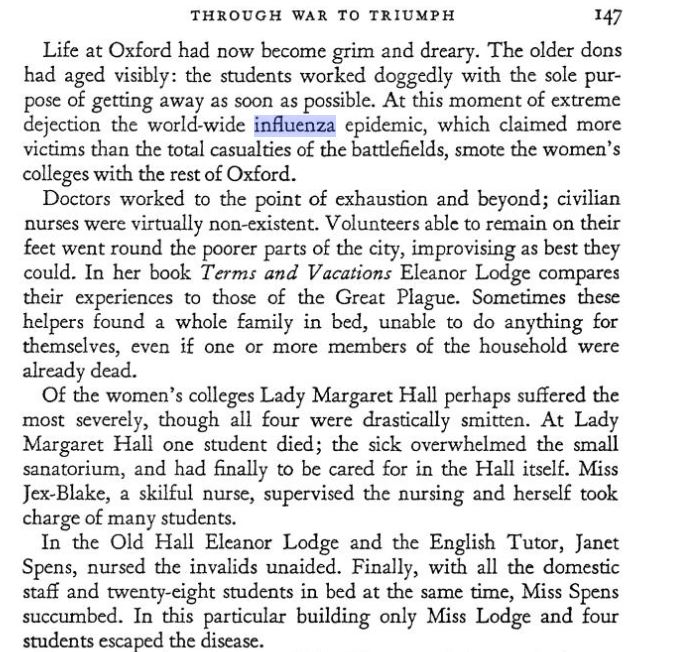 It records: “ Life at Oxford had now become grim and dreary. The older dons had aged visibly: the students worked doggedly with the sole purpose of getting away as soon as possible. At this moment of extreme dejection the world-wife influenza epidemic, which claimed more victims than the total casualties of the battlefields, smote the women’s colleges with the rest of Oxford.

“Doctors worked to the point of exhaustion and beyond; civilian nurses were virtually non-existent . Volunteers able to remain on their feet went round the poorer parts of the city, improvising as best as they could. In her book, Terms and Vacations, Eleanor Lodge compares their experiences to those of the Great Plague.

“Of the women’s colleges Lady Margaret Hall perhaps suffered the most severely, though all four were drastically smitten. At Lady Margaret Hall one student died; the sick overwhelmed the small sanitorium and finally had to be cared for in the Hall itself . Miss Jex-Blake, a skilful nurse, supervised the nursing and herself took charge of many students.”

“In the old hall Eleanor Lodge and the English tutor, Janet Spens, nursed the invalids unaided. Finally, with all the domestic staff and 28 students in bed at the same time, Miss Spens succumbed. In this particular building only Miss Lodge and four students escaped the disease”

So there you have a glimpse of how LMH fared during the pandemic of almost 100 years ago. We still have wonderful students, staff and tutors. And a rabbit....